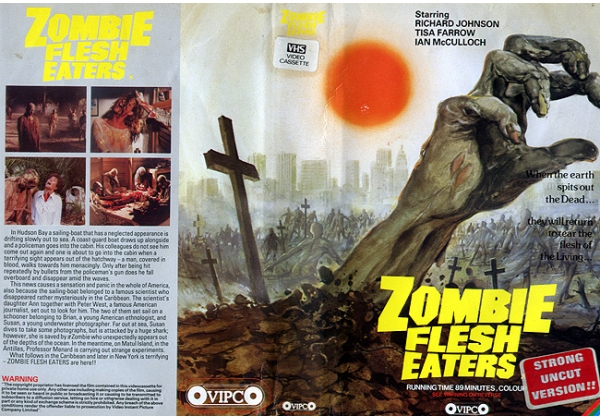 Sleeve Sypnosis:
When the earth spits out the Dead... they will return to tear the flesh of the Living...

In Hudson Bay a sailing-boat that has a neglected appearance is drifting slowly out to sea. A coast-guard boat draws up alongside and a policeman goes into the cabin. His colleagues do not see him come out again and one is about to go into the cabin when a terrifying sight appears out of the hatchway - a man, covered in blood, walks towards him menacingly. Only after being hit repeatedly by bullets from the policeman's gun does he fall overboard and disappear amid the waves. This news causes a sensation and panic in the whole of America, also because the sailing-boat belonged to a famous scientist who disappeared rather mysteriously in the Caribbean.

The scientist's daughter Ann together with Peter West, a famous American journalist, set out to look for him. The two of them set sail on a schooner belonging to Brian, a young American ethnologist, and Susan, a young underwater photographer. Far out at sea, Susan dives to take some photographs, but is attacked by a huge shark; however, she is saved by a Zombie who unexpectedly appears out of the depths of the ocean. In the meantime, on Matul Island, in the Antilles, Professor Menard is carrying out strange experiments. What follows in the Caribbean and later in New York is terrifying - ZOMBIE FLESH EATERS are here!!

Or find "Zombie Flesh Eaters" on VHS and DVD / BluRay at Amazon.