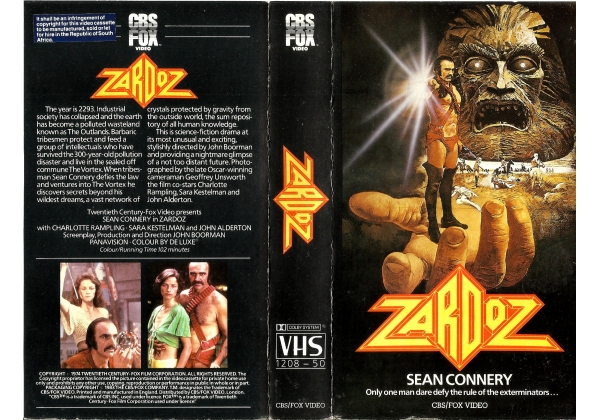 Sleeve Sypnosis:
Only one man dare defy the rule of the exterminators.

The year is 2293, Industrial society has collapsed and the earth has become a polluted wasteland known as The Outlands. Barbaric tribesmen protect and feed a group of intellectuals who have survived the 300-year-old pollution disaster and live in the sealed off commune The Vortex. When tribesman Sean Connery defies the law and ventures into The Vortex he discovers secrets beyond his wildest dreams, a vast network of crystals protected by gravity from the outside world, the sum respository of all human knowledge.

This science-fiction drama at its most unsual and exciting, stylishly directed by John Boorman and providing a nightmare glimpse of a not too distant future, Photographed by the late Oscar-winning cameraman Geoffrey Unsworth the film co-stars Charlotte Rampling, Sara Kestelman and John Alderton.

Or find "Zardoz" on VHS and DVD / BluRay at Amazon.