Year in Provence, A
BBC Video 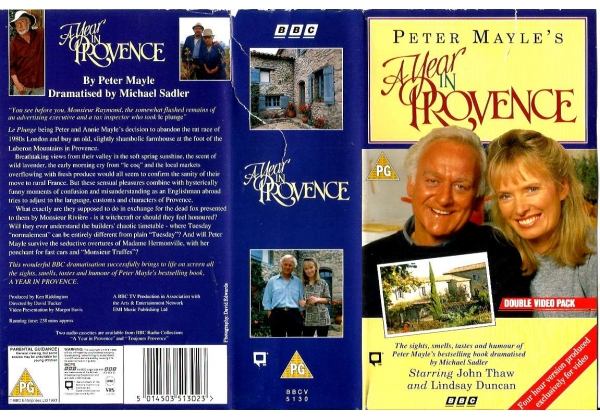 "You see before you, Monsieur Raymound, the somewhat flushed remains of an advertising executive and a tax inspector who took Le plunge"

Le Plunge being Peter and Annie Mayle's decision to abandon the rat race of 1980's London and buy an old, slightly shambolic farmhouse at the foot of the Luberon Mountains in Provence.

Breathtaking views from their valley in the soft spring sunshine, the scent of wild lavender, the early morning cry from "le cog" and the local markets overflowing with fresh produce would all seem to confirm the sanity of their move to rural France. But the sensual pleasures combine with hysterically funny moments of confusion and misunderstanding as an Englishman abroad tries to adjust to the language, customs, and characters of Provence.

What exactly are they supposed to do in exchange for the dead fox presented to them by Monsieur Rivière - is it witchcraft or should they feel honoured? Will they ever understand the builders' chaotic timetable - where Tuesday "normalement" can be entirely different from the plain - "Tuesday"? And will Peter Mayle survive the seductive overtures of Madame Hermonville, with her penchant for fast cars and "Monsieur Truffles"?

© A BBC production in association with the Arts & Entertainment Network (US)

Year in Provence, A

Or find "Year in Provence, A" on VHS and DVD / BluRay at Amazon.