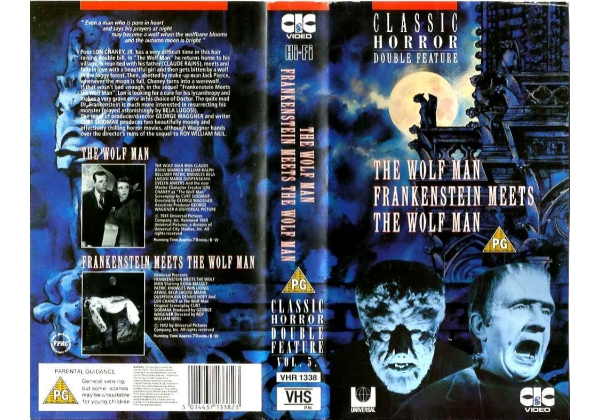 Sleeve Sypnosis:
Poor LON CHANEY, JR. has a very difficult time in this hair raising double bill. In "The Wolf Man" he returns home to his village, is reunited with his father (CLAUDE RAINS), meets and falls in love with a beautiful girl and then gets bitten by a wolf in the foggy forest. Then, abetted by make-up man Jack Pierce. Whenever the moon is full, Cheney turns into the warewolf.

If that wasn't bad enough, in the sequel "Frankenstein Meets the Wolf Man" , Lon is looking for a cure for his lyncanthropy and makes a very grave error in his choice of doctor. The quite mad Dr. Frankenstein is much more intrested in resurrecting his monster (played astonishingly by BELLA LUGOSI). The team of producer/director GEORGE WAGGNER and writer CURT SIODMAK produces two beautifuly moody and effectively chilling horror movies, although Waggner hands over the director's reins of the sequel to ROY WILLIAM NEIL.