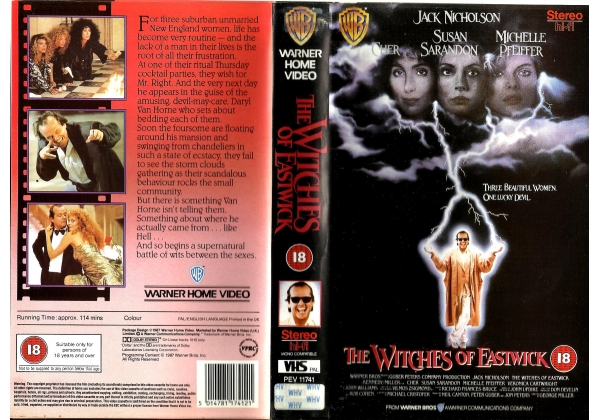 
For three suburban unmarried New England women, life has become very routine-and a lack of a man in their lives is the root of all their fustration . At one of their ritual Thursday cocktail parties, they wish for Mr. Right. And the very next day he appears in the guise of the amusing, devil-may-care, Daryl Van Horne who sets about bedding each of them.

Soon the foursome are floating around his mansion and swinging from the chanderliers in such a state of ecstacy, they fail to see the storm clouds gathering as their scandalous behaviour rocks the small community.

But there is something Van Horne isn't telling them. Something about where he actually came from. . .like Hell. . .

And so begins a supernatural battle of wits between the sexes.

Witches Of Eastwick, The

Or find "Witches Of Eastwick, The" on VHS and DVD / BluRay at Amazon.