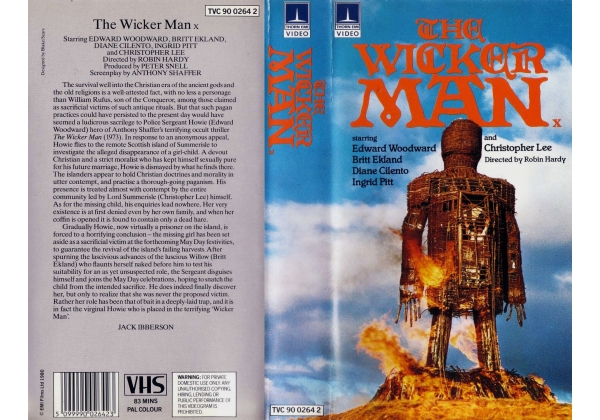 Sleeve Sypnosis:
The survival well into the Christian era of the ancient gods and the old religions is a well-attested fact, with no less a personage than William Rufus, son of the Conqueror, among those claimed as sacrificial victims of such antique rituals. But that such pagan practises could have persisted to the present day would have seemed a ludicrous sacrilege to Police Sergeant Howie (Edward Woodward) hero of the Anthony Shaffer's terrifying occult thriller The Wicker Man (1973). In response to an anonymous appeal, Howie flies to the remote Scottish island of Summerisle to investigate the alleged disappearance of a girl-child. A devout Christian and a strict moralist who has kept himself sexually pure for his future marriage, Howie is dismayed by what he finds there. The islanders appear to hold Christian doctrines and morality in utter contempt, and practise a thorough-going paganism. His presence is treated almost with contempt by the entire community led by the Lord Summerisle (Christopher Lee) himself. As for the missing child, his enquiries lead nowhere. Her very existence is at first denied even by her own family, and when her coffin is opened it is found contain only a dead hare. Gradually Howie, now virtually a prisoner on the island, is forced to horrifying conclusion - the missing girl has been set aside as a sacrificial victim at the forthcoming May Day festivities, to guarantee the revival of the island's failing harvests After spurning the lascivious advances of the luscious Willow (Britt Ekland) who flaunts herself naked before him to test his suitability for an as yet unsuspected role, the Seargent disguises himself and joins the May Day celebrations, hoping to snatch the child from the intented sacrifice. He does indeed finally discover her, but only to realize that she was never the proposed victim. Rather her role has been that of a bait in a deeply-laid trap, and it is in fact the virginal Howie who is placed in the terrifying 'Wicker Man'.