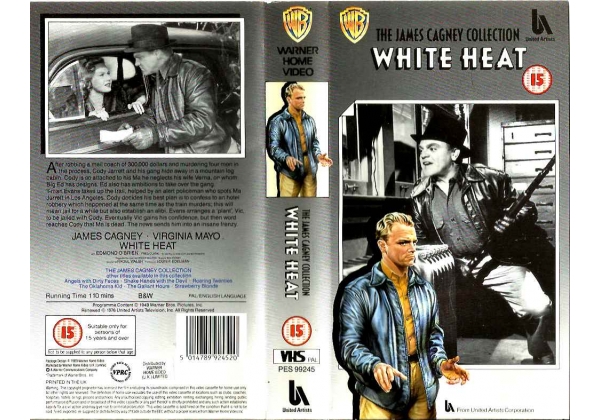 Sleeve Sypnosis:
After robbing a mail coach of 300,000 dollars and murdering four men in the process, Cody Jarrett and his gang hide away in a mountain log cabin.

Cody is so attached to his Ma he neglects his wife Verna, on whom Big Ed has designs. Ed also has ambitions to take over the gang. T-man Evans takes up the trail, helped by an alert policeman who spots Ma Jarrett in Los Angeles.

Cody decides his best plan is to confess to an hotel robbery which happend at the same time as the train murders; this will mean jail for a while but alos establish an alibi. Evans arranges a 'plant,' Vic to be jailed with Cody. Eventually Vic gains his confidence, but then word reaches Cody that Ma is dead. The news sends him into an insane frenzy.

Or find "White Heat" on VHS and DVD / BluRay at Amazon.