When a Woman Is in Love
VIPCO 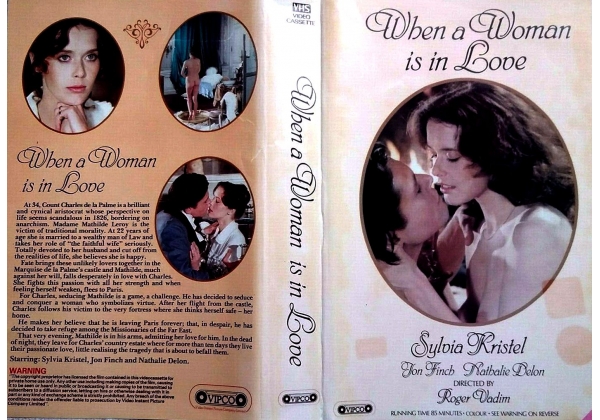 Sleeve Sypnosis:
At 34, Count Charles de la Palme is a brilliant and cynical aristocrat whose perspective on life seems scandalous in 1826, bordering on anarchism. Madame Mathilde Leroy is the victim of traditional morality. At 22 years of age she is married to a wealthy man of Law and takes her role of "the faithful wife" seriously. Totally devoted to her husband and cut off from the realities of life, she believes she is happy. Fate brings these unlikely lovers together in the Marquise de la Palme's castle and Mathilde, much against her will, falls desperately in love with Charles. She fights this passion with all her strength and when feeling herself weaken, flees to Paris. For Charles, seducing Mathilde is a game, a challenge. He has decided to seduce and conquer a woman who symbolizes virtue. After her flight from the castle, Charles follows his victim to the very fortress where she thinks herself safe - her home. He makes her believe that he is leaving Paris forever; that, in despair, he has decided to take refuge among the Missionaries of the Far East. That very evening, Mathilde is in his arms, admitting her love for him. In the dead of night, they leave for Charles' country estate where for more than ten days they live their passionate love, little realising the tragedy that is about to befall them.

When a Woman Is in Love

Or find "When a Woman Is in Love" on VHS and DVD / BluRay at Amazon.