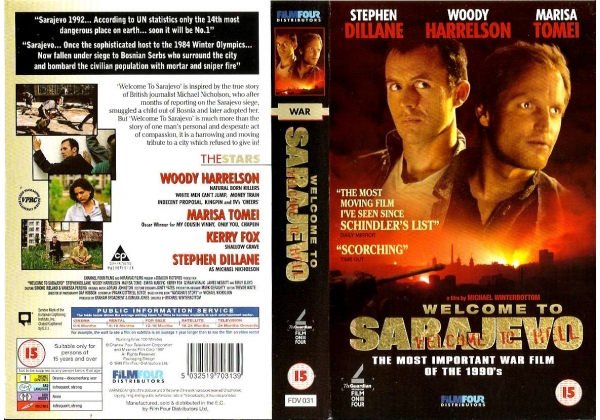 THE MOST IMPORTANT WAR FILM
OF THE 1990'S

"Sarajavo 1992...According to UN Statistics only 14th most dangerous place on earth...soon it will be No. 1"

"Sarajavo... Once the sophisticated host to the 1984 Winter Olympics... Now fallen under siege to Bosnian Serbs who surround the city and bombard the civilian population with mortar and sniper fire"

'Welcome To Sarajevo' is inspired by the true story of British journalist Michael Nicholson, who after months of reporting on the Sarajevo siege, smuggled a child out of Bosina and later adopted her. But 'Welcome To Sarajevo' is much more than the story of one man's personal and desperate act of compassion, it is a harrowing and moving tribute to a city which refused to give in!

Or find "Welcome to Sarajevo" on VHS and DVD / BluRay at Amazon.