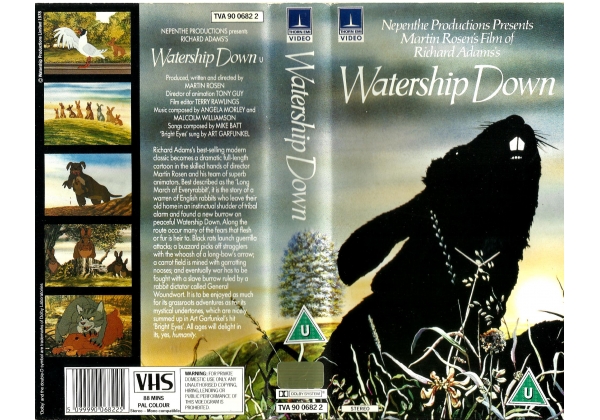 Sleeve Sypnosis:
Richard Adams's best-selling modern classic becomes a dramatic full-length cartoon in the skilled hands of director Martin Rosen and his team of superb animators. Best described as the Long March of Every Rabbit; it is the story of a warren of English rabbits who leave their own home in an instinctual shudder of tribal alarm and found a new burrow on peaceful Watership Down. Along the route occur many of the fears that flesh or fur is heir to. Black rats launch guerrilla attacks; a buzzard picks of stragglers with the whoosh of a long-bow's arrow; a carrot field is mined with garrotting noose; and eventually war has to be fought, with a slave burrow ruled by a rabbit dictator called General Woundwart. It is to be enjoyed as much for its grassroots adventures as for its mystical undertones, which are nicely summed up in Art Garfunkel's Hit 'Bright Eyes'. All ages will delight in its, yes, humanity.

Or find "Watership Down" on VHS and DVD / BluRay at Amazon.