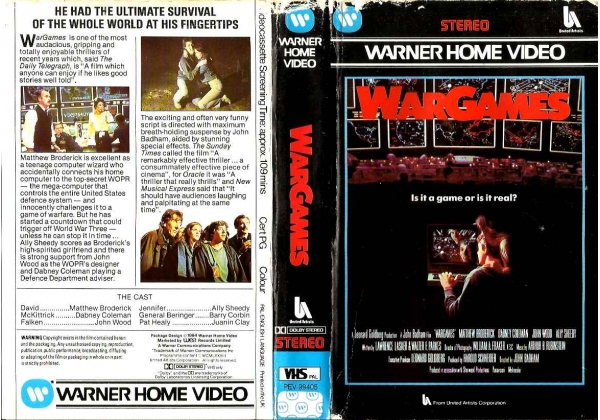 Sleeve Sypnosis:
HE HAD THE ULTIMATE SURVIVAL OF THE WHOLE WORLD AT HIS FINGERTIPS. WarGames is one of the most audacious, gripping and totally enjoyable thrillers of recent years which, said The Daily Telegraph, is "A film which anyone can enjoy if he likes good stories well told". Matthew Broderick is excellent as a teenage computer wizard who accidently connects his home computer to the top-secret WOPR - the mega-computer that controls the entire United States defence system - and innocently challenges it to a game of warfare. But he has started a countdown that could trigger off World War Three - unless he can stop it in time... Ally Sheedy scores as Broderick's high-spirited girlfriend and there is strong support from John Wood as the WOPR's designer and Dabney Coleman playing a Defence Department adviser. The exciting and often very funny script is directed with maximum breath-holding suspense by John Badham, aided by stunning special effects. The Sunday Times called the film "A remarkably effective thriller... a consummately effective piece of cinema", for Oracle it was "A thriller that really thrills" and New Musical Express said that "it should have audiences laughing and palpitating at the same time".

Or find "War Games" on VHS and DVD / BluRay at Amazon.