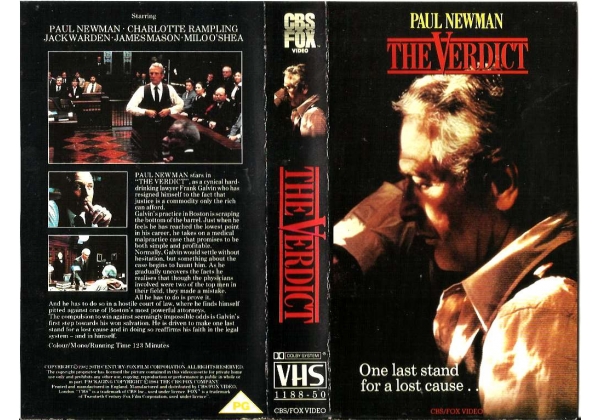 Sleeve Sypnosis:
One last stand
for a lost cause...

PAUL NEWMAN stars in "The verdict", as a cynical hard drinking lawyer Frank Galvin who has resigned himself to the fact that justice is a commodity only the rich can afford. Galvin's practice in Boston is scraping the bottom of the barrel. Just when he feels he has reached the lowest point in his career, he takes on a medical malpractice case that promises to be both simple and profitable. Normally, Galvin would settle without hesitation , but something about the case begins to haunt him.

As he gradually uncovers the facts he realises that though the physicians involved were two of the top men in their field, they made a mistake. All he has to do is prove it. And he has to do so in a hostile court of law, where he finds himself pitted against one of Boston's most powerful attorneys. The compulsion to win against seemingly impossible odds is Galvin's first step towards his won salvation.

He is driven to make one last stand for a lost cause and in doing so reaffirms his faith in the legal system-and in himself.

Or find "Verdict, The" on VHS and DVD / BluRay at Amazon.