Unsuitable Job for a Woman, An
Palace Video 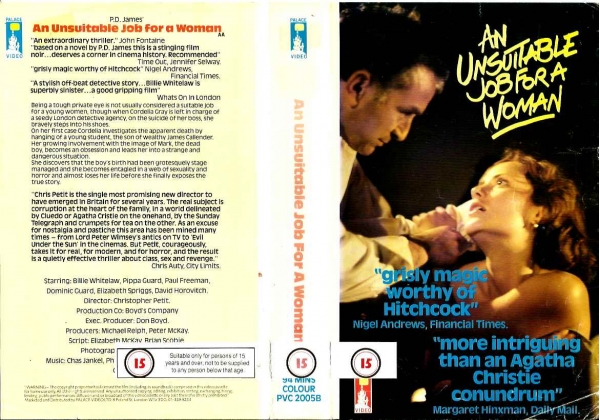 Sleeve Sypnosis:
"An extraordinary thriller". John Fontaine
"based on a novel by P.D. James this is a stinging film noir. . . deserves a corner in cinema history. Recommended" Time Out, Jennifer Selway.

Being a tough young private eye is not usually considered a suitable job for a young woman, though when Cordelia Gray is left in charge of a seedy London detective agency, on the suicide of her boss, she bravely steps into his shoes. On her first case Cordelia investigates the apparent death by hanging of a young student , the son of a wealthy James Callender.

Her growing involvement with the image of Mark, the dead boy, becomes an obsession and leads her into strange and dangerous situation. She discovers that the boy's birth had been grotesquely stage managed and she becomes entagled in a web of sexuality and horror and almost loses her life before she finally exposes the true story.

"Chris Petit is the single most promising new director to have emerged in Britain for several years. The real subject is corruption at the heart of the family, in a world delineated by Cluedo or Agatha Cristie on the onehand, by the Sunday Telegraph and crumpets for tea on the other. As an excuse for nostalgia and pastiche this area has been mined many times - from Lord Peter Wimsey's antics on TV to 'Evil Under the Sun' in the cinemas. But Petit, courageously, takes it for real, for modern, and for horror, and the result is a quitely effective thriller about class, sex and revenge. " Curtis Auty, City Limits.

Unsuitable Job for a Woman, An

Palace Video
Cat No:
PVC 2005B
Distributor
* N/A or Unknown

Or find "Unsuitable Job for a Woman, An" on VHS and DVD / BluRay at Amazon.