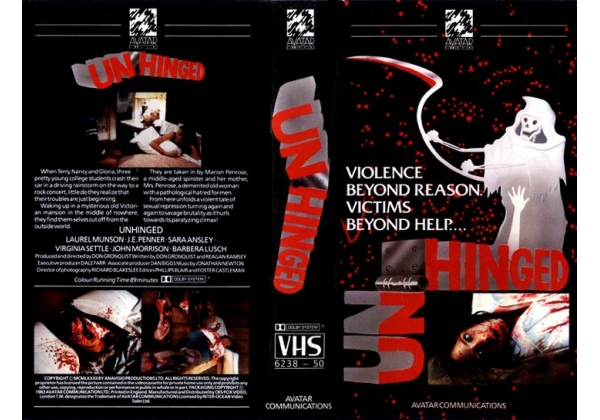 Sleeve Sypnosis:
Violence beyond reason. Victims beyond help....
When Terry, Nancy and Gloria, three pretty young college students crash their car in a driving rainstorm on the way to a rock concert, little do they realize that their troubles are just beginning. Waking up in a mysterious old Victorian mansion in the middle of nowhere, they find themselves cut off from the outside world. They are taken in by Marion Penrose, a middle-aged spinster and her mother, Mrs. Penrose, a demented old woman with a pathological hatred for men. From here unfolds a violent tale of sexual repression turning again and again to savage brutality as it hurls towards its paralyzing climax!

Or find "Unhinged" on VHS and DVD / BluRay at Amazon.