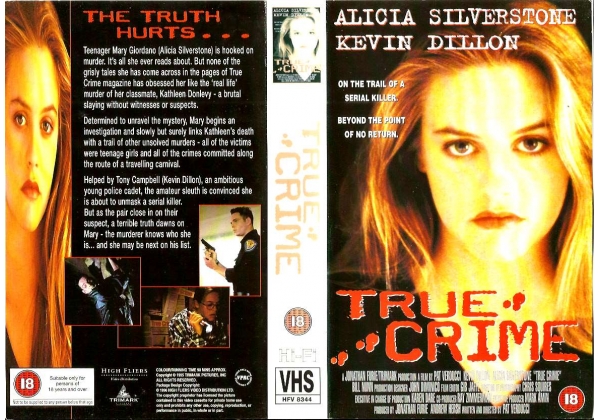 Sleeve Sypnosis:
ON THE TRAIL OF A SERIAL KILLER.

BEYOND THE POINT OF NO RETURN.

Teenager Mary Giordano (Alicia Silverstone) is hooked on murder. It's all she ever reads about. But none of the grisly tales she has come across in the pages of True Crime magazine has obsessed her like the 'real life' murder of classmate, Kathleen Donlevy - a brutal slaying without witnesses or suspects.

Determined to unravel the mystery, Mary begins an investigation and slowly but surely links Kathleen's death with a trail of other unsolved crimes committed along the route of a travelling carnival.

Helped by Tony Campbell (Kevin Dillon), an ambitious young police cadet, the amateur sleuth is convinced she is about to unmask a serial killer. But as the pair close in on their suspect, a terrible truth dawns on Mary - the murderer knows who she is ... and she may be next on his list.

Or find "True Crime" on VHS and DVD / BluRay at Amazon.