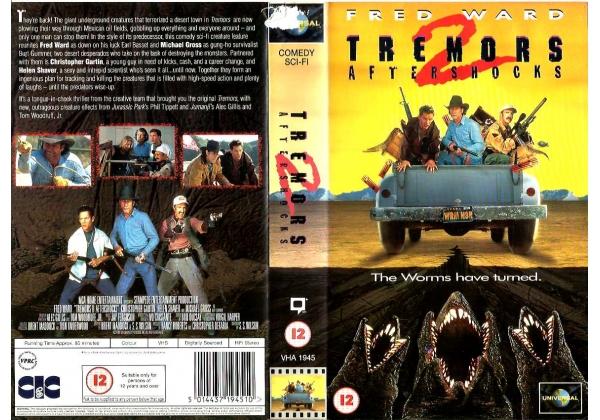 Sleeve Sypnosis:
They're back! The giant underground creatures that terrorized a desert town in Tremors are now plowing their way through Mexican oil fields, gobbling up everything and everyone around-and only one man can stop them! In the style of its predecessor, this comedy sc-fi creature feature reunites Fred Ward as down on his luck Earl Basset and Michael Gross as gung-ho survivalist Burt Gummer, two desert desperados who take on the task of destroying the monsters. Partnered with them is Christopher Gartin, a young guy in need of kicks, cash, and a career cahnge, and Helen Shaver, a sexy and intrepid scientist who's seen it all...until now. Together they form an ingenious plan for tracking and killing the creatures that is filled with high-speed action and plenty of laughs-until the predators wise-up.

It's tongue-in-cheek thriller from the creative team that brought you the original Tremors, with new, outrageous creature effects from Jurassic Park's Phil Tippett and Jumanji's Alec Gillis and Tom Woodruff, Jnr.

Or find "Tremors 2: Aftershocks" on VHS and DVD / BluRay at Amazon.