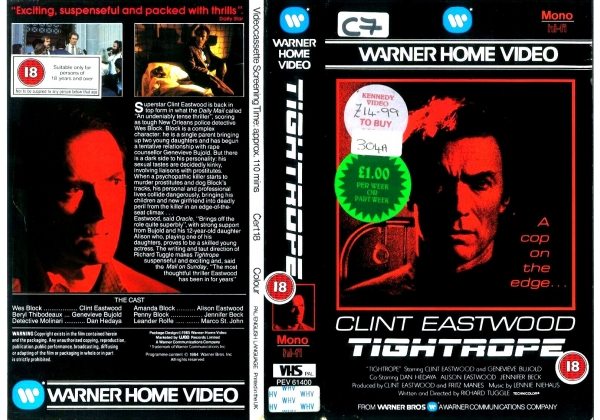 Superstar Clint Eastwood is back in top form in what the Daily Mail called "An undeniably tense thriller", scoring as tough New Orleans police detective Wes Block. Block is a complex character: he is a single parent bringing up two young daughters and has begun a tentative relationship with rape counsellor Genevieve Bujold. But there is a dark side to his pesonailty: his sexual tastes are decidedly kinky, involving liaisons with prostitutes and dog Block's tracks, his personal and professional lives collide dangeously, bringing his children and new girlfriend into deadly peril from the killer in an edge-of-the-seat climax...

Eastwood, said Oracle, "Brings off the role quite superbly", with strong support rom Bujold and his 12 year old daughter Alison who, playing one of his daughters, proves to be a skilled young actress. The writing and taut direction of Richard Tuggle makes Tightrope suspenseful and exciting and, said the Mail on Sunday, "The most thoughtful thriller Eastwood has been in for years"

Or find "Tightrope" on VHS and DVD / BluRay at Amazon.