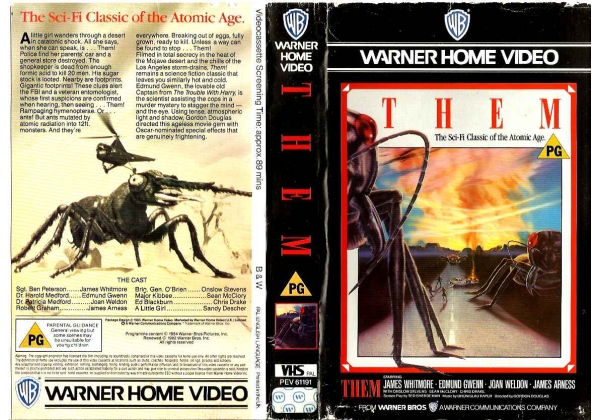 Sleeve Sypnosis:
A little girl wanders through a desert in catatonic shock. All she says, when she can speak, is... Them! Police find her parents' car and a general store destroyed. The shopkeeper is dead from enough formic acid to kill 20 men. His sugar stock is looted. Nearby are footprints. Gigantic footprints! These clues alert the FBI and a veteran entomologist, whose first suspicions are confirmed when hearing, then seeing... Them! Rampaging hymenopterae. Or... ants! But ants mutated by atomic radiation into 12ft. monsters And they're everywhere. Breaking out of eggs, fully grown, ready to kill. Unless a way can be found to stop... Them! Filmed in total secrecy in the heat of the Mojave desert and the chills of the Los Angeles storm-drains, Them! remains a science fiction classic that leaves you similarly hot and cold. Edmund Gwenn, the lovable old Captain from The Trouble With Harry, is the scientist assisting the cops in a murder mystery to stagger the mind - and the eye. Using tense, atmospheric light and shadow, Gordon Douglas directed this ageless movie gem with Oscar-nominated special effects that are genuinely frightening.