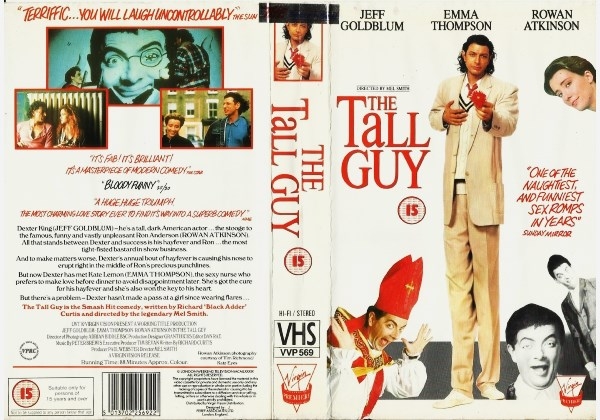 Sleeve Sypnosis:
"One of the naughtiest, and funniest sex romps in years" SUNDAY MIRROR

"Terriffic...You will be laughing uncontrollably" THE SUN

"It's fab! It's brilliant!
It's a masterpiece of modern comedy" THE STAR

"A huge triumph. The most charming love story ever to find it's way into a superb comedy" NME

Dexter King (JEFF GOLDBLUM) - he's tall, dark American actor...the stooge to the famous and funny and vastly unpleasent Ron Anderson (ROWAN ATKINSON). All that stands between Dexter and the success is his hayfever and Ron... the most tight-fisted bastard in show business.

And to make matter's worse, Dexter's annual bout of hayfever is causing his nose to errupt right in the middle of Ron's precious punchlines. But now Dexter has met Kate Lemon (EMMA THOMPSON), the sexy nurse who prefers to make love before dinner to avoid disppointment later. She's got the cure for his hayfever and she's also won the key to his heart.

But there's a problem-Dexter hasn't made a pass at a girl since wearing flares...

The Tall Guy is the Smash Hit comedy, written by Richard 'Black Adder' Curtis and directed by the legendary Mel Smith.

Or find "Tall Guy, The" on VHS and DVD / BluRay at Amazon.