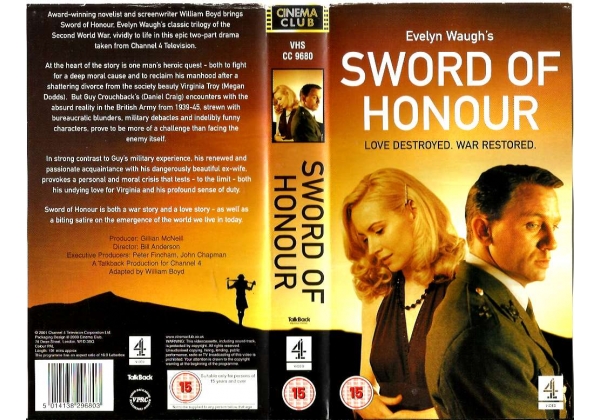 A the heart of the story is one man's heroric quest - both to fight for a deeper moral cause and to reclaim his manhood after a shattering divorce from the society beauty Virginia Troy (Megan Dodds). But Guy Crouchback's (Daniel Craig) encounters with the absurd reality in the British Army from 1939 - 45. Strewn with bureaucratic blunders, military debacles and indeliby funny characters, prove to be more of a challenge than facing the enemy itself.

In strong contrast to Guy's military experience, his renewed and passionate acquaintance with his dangerously beautiful ex-wife, provokes a personal and moral crisis that tests - to the limit - both his underlying love for Virginia and his profound sense of duty.

Sword of Honour is both a war story and a love story - as well as a biting satire on the emergence of the world we live in today.

Or find "Sword of Honour" on VHS and DVD / BluRay at Amazon.