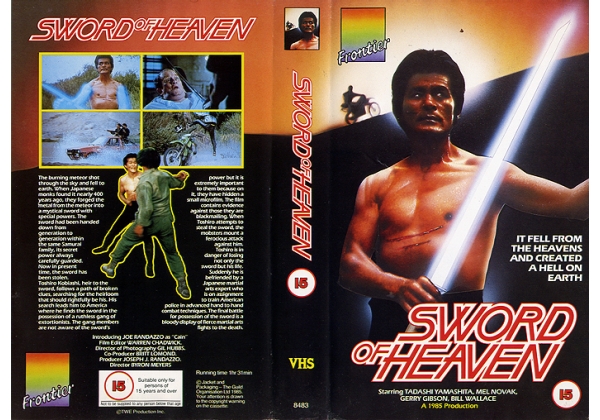 Sleeve Sypnosis:
The burning meteor shot through the sky and fell to earth. When Japanese monks found it nearly 400 years ago, they forged the metal from the meteor into a mystical sword with special powers. The sword had been handed down from generation to generation within the same Samurai family, its secret power always carefully guarded. Now in present time, the sword has been stolen.

Toshiro Kobiashi, heir to the sword, follows a path of broken clues, searching for the heirloom that should rightfully his. His search leads him to America where he finds the sword in the possession of a ruthless gang of extortionists. The gang members are not aware of the sword's power but it is extremely important to them because on it, they have hidden a small microfilm. The film contains evidence amongst those they are blackmailing.

When Toshiro attempts to steal the sword, the mobsters mount a ferocious attack against him. Toshiro is in danger of losing not only the sword but his life. Suddenly his is befriended by a Japanese martial arts expert who is on assignment to train American police in advanced hand to hand combat techniques. The final battle for possession of the sword is a bloody display of fierce martial arts fights to the death.

Or find "Sword of Heaven" on VHS and DVD / BluRay at Amazon.