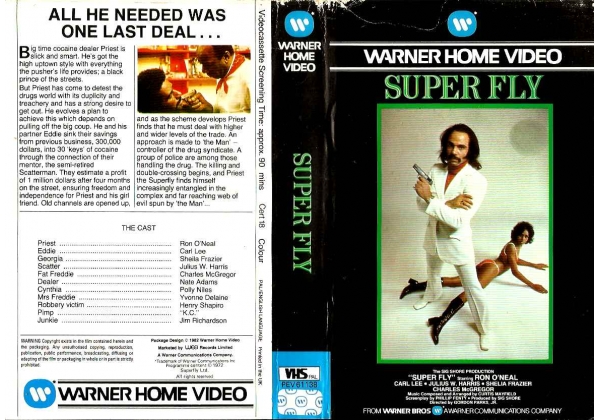 Sleeve Sypnosis:
ALL HE NEEDED WAS ONE LAST DEAL...

Big time cocaine dealer Priest is slick and smart. He's got the high uptown style with everything the pusher's life provides; a black prince of the streets. But Priest has come to detest the drugs world with its duplicity and treachery and has a strong desire to get out. He evolves a plan to achieve this which depends on pulling off the big coup. He and his partner Eddie sink their savings from previous business, 300, 000 dollars, into 30 'keys' of cocaine through the connection of their mentor, the semi-retired Scatterman. They estimate a profit of 1 million dollars after four months on the street, ensuring freedom and independence for Priest and his girl friend. Old channels are opened up, and as the scheme develops Priest finds that he must deal with higher and wider levels of the trade. An approach is made to 'the Man' - controller of the drug syndicate. A group of police are among those handling the drug. The killing and double-crossing begins, and Priest the Superfly finds himself increasingly entangled in the complex and far reaching web of evil spun by 'the Man'...

Or find "Super Fly" on VHS and DVD / BluRay at Amazon.