Sunday in the Country
Intervision 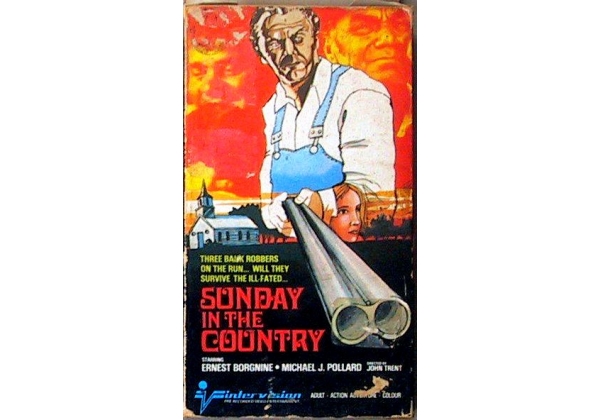 Sleeve Sypnosis:
THREE BANK ROBBERS ON THE RUN... WILL THEY SURVIVE THE ILL-FATED... SUNDAY IN THE COUNTRY
Absolutely first-rate action-adventure. Three bank robbers are on the run from the police after killing two men, and later also a young couple whose car they steal in order to search for a hide-out. Their hide-out is a farm, very run-down owned by Adam Smith who lives there with his grand-daughter, Lucy. Adam learns of the fugitives and makes plans to deal with them in the event that they come to the farm. Adam decides that he will decide upon their fate rather than turn them over to the local authorities and as the gang arrives, Adam blasts the leader dead with his shot-gun and for the next four hours subjects the surviving two to every mental torture and indignity that he can devise.

Sunday in the Country

Or find "Sunday in the Country" on VHS and DVD / BluRay at Amazon.