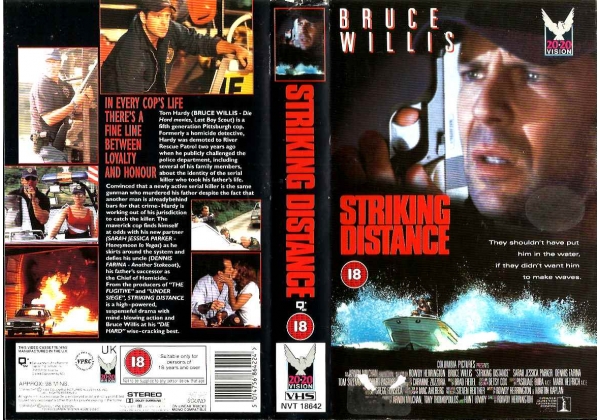 Sleeve Sypnosis:
IN EVERY COP'S LIFE THERE'S A FINE LINE BETWEEN LOYALTY AND HONOUR

Tom Hardy (BRUCE WILLIS - Die Hard movies, Last Boy Scout) is a fifth generation Pittsburgh cop. Formerly a homicide detective, Hardy was demoted to River Rescue Patrol two yrs ago. When he publicly challenged the police department, including several of his family members, about the identity of the serial killer is the same gunman who murdered his father despite the fact that another man is already behind bars for that crime-Hardy is out of jurisdiction to catch the killer.

The maverick cop finds himself at odds with his new partner (SARAH JESSICA PARKER-Honeymoon in Vegas) as he skirts around the system and defies his uncle (DENNIS FARINA-Another Stakeout), his father's successor as the Chief of Homicide.

From the producers of "THE FUGITIVE and "UNDER SIEGE", STRIKING DISTANCE is a high-powered, suspenseful drama with mind-blowing action and Bruce Wills at his "DIE HARD" wise-cracking best.

Or find "Striking Distance" on VHS and DVD / BluRay at Amazon.