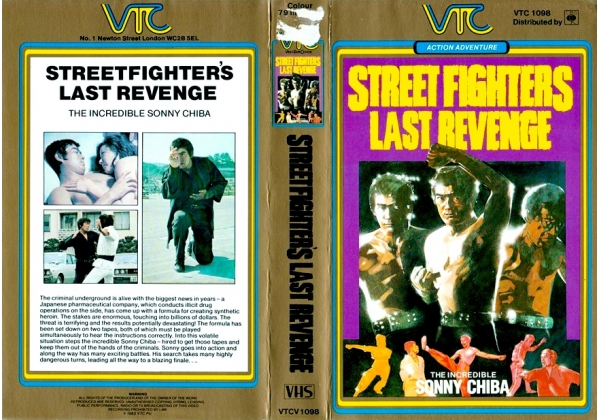 Sleeve Sypnosis:
The criminal underground is alive with the biggest news in years - a Japanese pharmaceutical company, which conducts illicit drug operations on the side, has come up with a formula for creating synthetic heroin. The stakes are enormous, touching into billions of dollars. The threat is terrifying and the results potentially devastating! The formula has been set down on two tapes, both of which must be played simultaneously to hear the instructions correctly. Into this volatile situation steps the incredible Sonny Chiba - hired to get those tapes and keep them out of the hands of the criminals. Sonny goes into action and along the way has many exciting battles. His search takes many highly dangerous turns, leading all the way to a blazing finale....

Or find "Streetfighter's Last Revenge" on VHS and DVD / BluRay at Amazon.