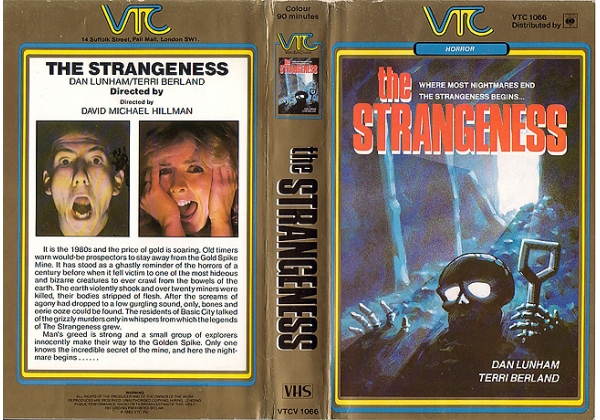 Sleeve Sypnosis:
WHERE MOST NIGHTMARES END THE STRANGENESS BEGINS...
It is the 1980s and the price of gold is soaring. Old timers warn would-be prospectors to stay away from the Gold Spike Mine. It has stood as a ghastly reminder of the horrors of a century before when it fell victim to one of the most hideous and bizarre creatures to ever crawl from the bowels of the earth. The earth violently shook and over twenty miners were killed, their bodies stripped of flesh. After the screams of agony had dropped to a low gurgling sound, only, bones and eerie ooze could be found. The residents of Basin City talked of the grizzly murders in whispers from which the legends of The Strangeness grew. Man's greed is strong and a small group of explorers innocently make their way to the Golden Spike. Only one knows the incredible secret of the mine, and here the nightmare begins......

Or find "Strangeness, The" on VHS and DVD / BluRay at Amazon.