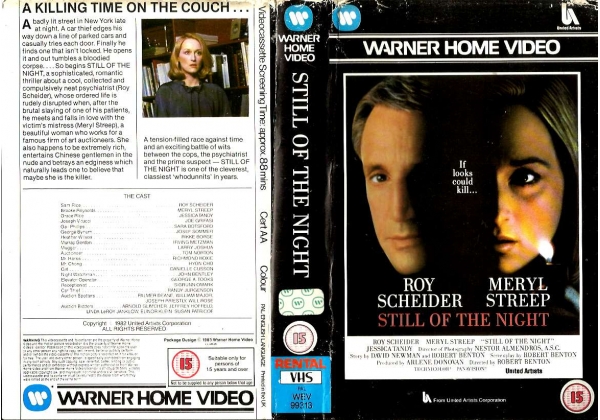 Sleeve Sypnosis:
If looks could kill...

A KILLING TIME ON THE COUCH...

A badly lit street in New York late at night. A car thief edges his way down a line of parked cars and casually tries each door. Finally he finds one that isn't locked. He opens it and out tumbles a bloodied corpse...So begins STILL OF THE NIGHT, a sophisticated, romantic thriller about a cool, collected and compulsively neat psychiatrist (Roy Scheider), whose ordered life is rudely disrupted when, after the brutal slaying of one of his patients, he meets and falls in love with the victim's mistress (Meryl Streep), a beautiful woman who works for a famous firm of art auctioneers. She also happens to be extremely rich, entertains Chinese gentlemen in the nude and betrays an edginess which naturally leads one to believe that she is the killer.

A tension-filled race against time and an exciting battle of wits between the cops, the psychiatrist and the prime suspect-STILL OF THE NIGHT is one of the cleverest, classiest 'whodunnits' in years.

Still of the Night

Or find "Still of the Night" on VHS and DVD / BluRay at Amazon.