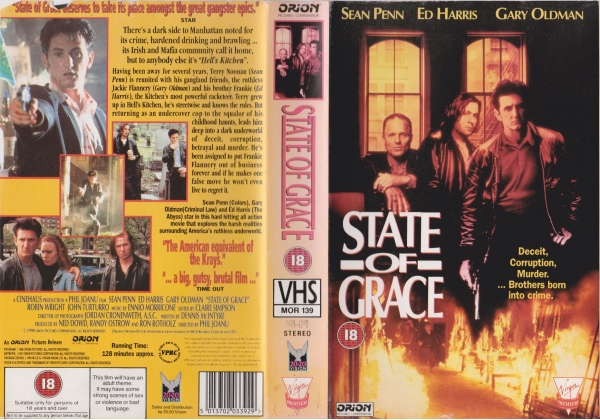 "State of Grace deserves to take it's place amongst the great gangster epics."
STAR

There's a dark side to Manhattan noted for it's crime, hardened drinking and brawling...its Irish and Mafia community call it home, but anybody else it's Hell's Kitchen".

Having been away for serveral years, Terry Noonan (Sean Penn) is reunited with his gangland friends, the rutherless Jackie Flannery (Gary Oldman) and his brother Frankie (Ed Harris), the kitchen 's most powerful racketeer. Terry grew up in Hell's Kitchen, he's streetwise and knows the rules. But returning as an undercover cop to the squalor of his childhood haunts, leads him deep into the dark underworld of deceit, and corruption, betrayal and murder. He's been assigned to put Frankie Flannery out of business forever and if he makes one false move he won't even live to regret it.

"The American equivalent of The Krays."
"...a big, gutsy, brutal film.." TIME OUT

Or find "State Of Grace" on VHS and DVD / BluRay at Amazon.