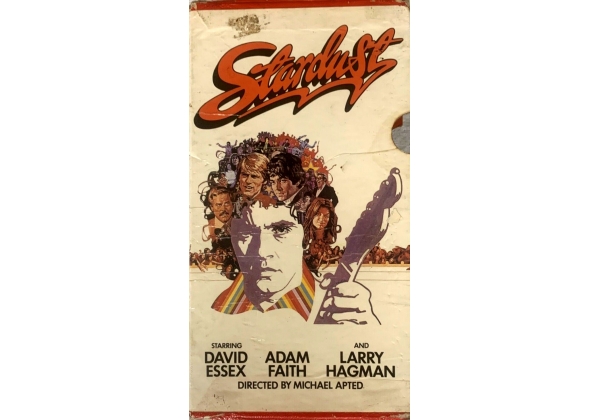 Sleeve Sypnosis:
Brought to the screen eighteen months after That'll Be The Day, Stardust (1974) picks up the story of Jim MacLaine in 1963. Last seen going off to join a rock group, clutching a newly-bought guitar. Jim is now enjoying the nomadic gigs and groupies life of The Stray Cats (Paul Nicholas. Keith Moon, Dave Edmunds and Karl Howman). His old fairground buddy Mike (Adam Faith taking over from Ringo Starr) becomes their road manager and under his cool and merciless guidance, they get into the big time of hit records, groomed to boyish Beatles-like charm by smoothie music publisher Colin Day (Marty Wilde). Day pulls a fast one on The Stray Cats by selling them to a tough American tycoon called Porter Lee Austin (Larry Hagman, who was later go corner the market in villains we love to hate as J.R. in the television series Dallas). From then on, although Jim achieves all his wildest dreams of international stardom, the sweet taste of success begins to turn sour. His private life becomes almost non-existent and his development as a creative artist is stultified by Porter Lee's demands. In the rise and fall of Jim MacLaine, writer Ray Connolly provides a condensed but vivid and lively history of the pop music scene from the youthful exuberance of Beatlemania through the 'pop star as guru' era to the tragedy-strewn days when the pressures proved too great for so many talented musicians of the 'Sixties. And the real life music stars who appear in the story are examples of those who survived and those who did not. Like That'll Be The Day, Stardust disproves the glib theory that the British cinema can only produce cosy little films about parochial subjects. It is as big and bright as a Hollywood musical, but with a solid foundation of truth recognisable as such in any part of the world.

Or find "Stardust" on VHS and DVD / BluRay at Amazon.