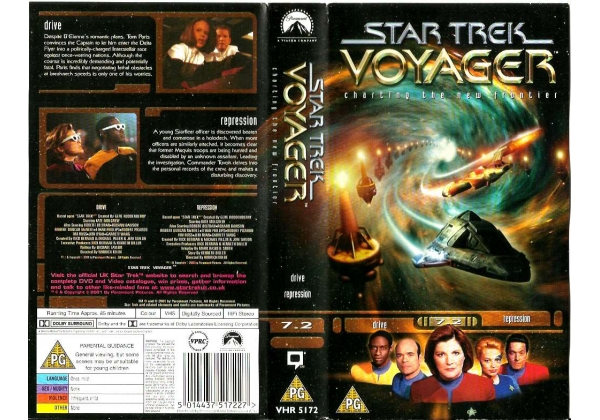 Despite B'Elanna's romantic plans, Tom Paris covinces the Captain to let him enter the Delta Flyer into a politically-charged intersellar race against once-warring nations. Although the course is incredibly demanding and potentially fatal, Paris finds that negotiating lethal obstacles at breakneck speeds is one of his worries.

A young Starfleet officer is discovered beaten and comatose in a holodeck. When more officers are similarly attacked, it becomes clear that former Maquis troops are being hunted and disabled by an unknown assailant. Leading the investigation , Commander Tuvok delves into the personal records of the crew, and makes a distrubing discovery.

Or find "Star Trek: Voyager 7.2 - Drive/Repression" on VHS and DVD / BluRay at Amazon.