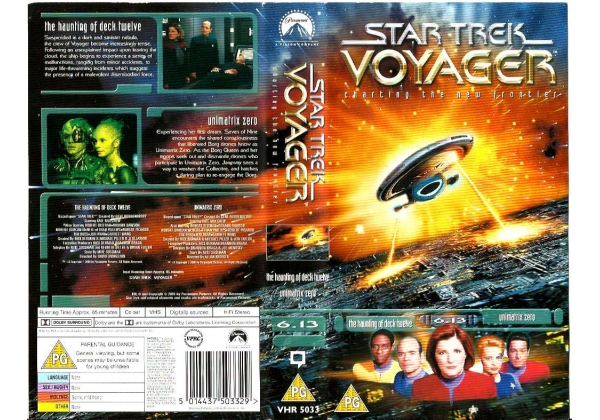 Sleeve Sypnosis:
The Haunting of Deck Twelve
Suspended in the dark and sinister nebula, the crew of the Voyager become increasingly tense. Following an unexplained impact upon leaving the cloud, the ship begins to experience a series of malfunctions, ranging from minor accidents, to major life-threatening incidents which suggest the presence of a malevolent disembodied force.

Experiencing her first dream, Seven of Nine encounters the shared consciousness that liberated Borg drones known as the unimatrix Zero. As the Borg Queen and her troops seek out and dismantle drones who participate in Unimatrix Zero. Janeway sees a way to weaken the Collective, and hatches a daring plan to re-engage the Borg.

Or find "Star Trek: Voyager 6.13 - The Haunting of Deck Twelve/Unimatrix Z" on VHS and DVD / BluRay at Amazon.