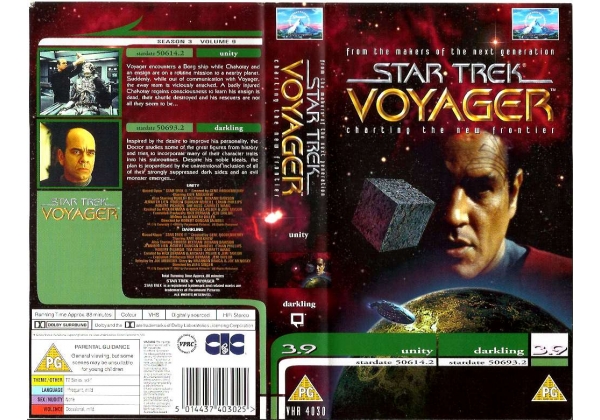 Voyager encounters a Borg ship while Chakotay and an ensign are on a routine mission to a nearby planet. Suddenly, while out of communication with Voyager, the away team is viciously attacked. A badly injured Chakotay regains consciousness to learn his ensign is dead, their shuttle destroyed and his rescuers are not all they seem...

Inspired by the desire to improve his personality, the Doctor studies some of the great figures from history and tries to incorporate many of their character traits into his subroutines. Despite his noble ideals, the plan is jeopardised by the unintentional inclusion of all of their strongly suppressed dark sides and an evil monster emerges...

Or find "Star Trek: Voyager 3.9 - Unity/Darkling" on VHS and DVD / BluRay at Amazon.