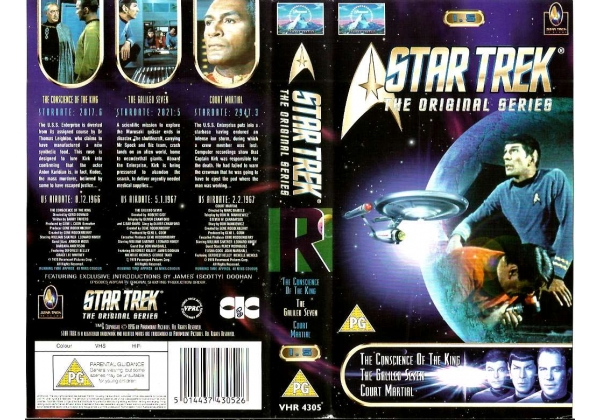 Sleeve Sypnosis:
THE CONSCIENCE OF THE KING
Stardate: 2817.6

The U.S.S. Enterprise is diverted from its assigned course by Dr Thomas Leighton, who claims to have manufactured a new synthetic food. The ruse is designed to lure Kirk into confirming that the actor Anton Karidian is, in fact, Kodos, the mass murderer, believed by some to have escaped justice...

A scientific mission to explore the Murusaki quasar ends in disaster. The shuttlecraft, carrying Mr Spock and his team, crash lands on alien world, home to neanderthal giants. Aboard the Enterprise, Kirk is being pressured to abandon the search, to deliver urgently needed medical supplies...

The U.S.S. Enterprise puts into a starbase having endured an intesnse ion storm, during which a crew member was lost. Computer recordings show that Captain Kirk was responsible for the death. He had failed to warn the crewman that he was going to have to eject the pod where the man was working...