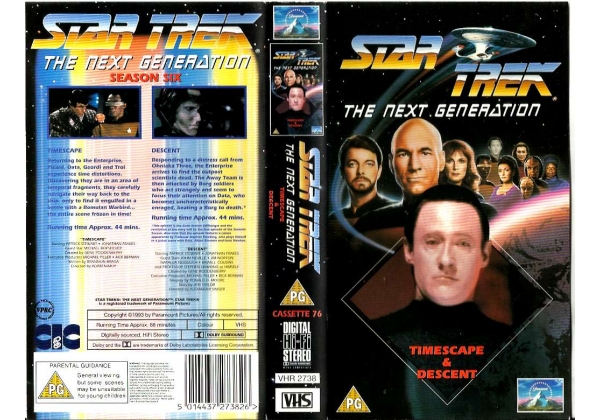 Returning to the Enterprise, Picard, Data,Geordi and Troi experience time distortions. Discovering they are in an area of temporal fragments, they carefully navigate their way back to the ship, only to find it engulfed in a battle with a Romulan Warbird...the entire scene frozen in time!

Responding to a distress call from Ohniaka Three, the Enterprise arrives to find the outpost scientists dead. The Away Team is then attacked by Borg soldiers who act strangely and seem to focus their attention on Data, who becomes uncharacteristically enraged, beating a borg to death.

Or find "Star Trek: The Next Generation Cassette 76 - Timescape/Descen" on VHS and DVD / BluRay at Amazon.