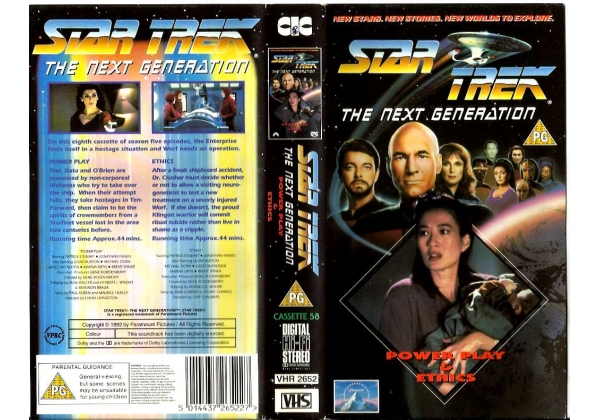 Sleeve Sypnosis:
On this eighth cassette of season five episodes, the Enterprise finds itself in a hostage situation and Worf needs an operation.

Troi, Data and O'Brien are possessed by non-corporeal lifeforms who try to take over the ship. When their attempt fails, they take hostages in Ten Foward, then claim to be the spirits of crewmembers from Starfleet vessel lost in the area two centuries before.

After a freak shipboard accident, Dr. Crusher must decide whether or not to allow a visting neuro-geneticist to test a new treatment on a severly injured Worf. If she doesn't, the proud Klingon warrior will commit suicide rather then live in shame as a cripple.

Or find "Star Trek: The Next Generation Cassette 58 - Power Play/Ethics" on VHS and DVD / BluRay at Amazon.