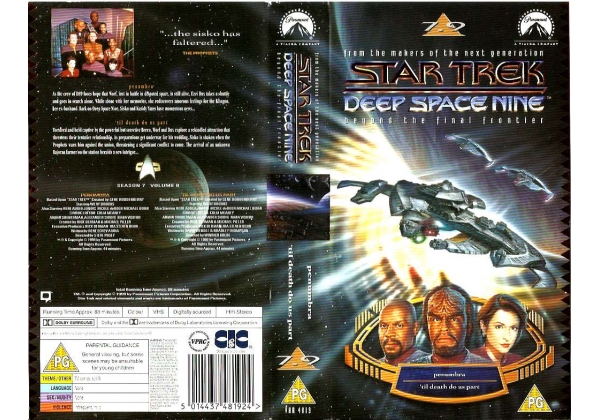 Sleeve Sypnosis:
"...the Sisko has faltered..."
THE PROPHETS

As the crew of DS9 loses hope that Worf, lost in the battle in disputed space, is still alive, Ezri Dax takes a shuttle and goes in search alone. While alone with her memories, she rediscovers amorous feelings for the Klingon, her ex-husband. Back on DS9, Sisko and Kasidy Yates have momentous news...

'Til Death Do Us Part

Tortured and held captive by the powerful and secretive Breen, Worf and Dax explore a rekindled attraction that threatens their tentative relationship. As preperations get underway for the wedding, Sisko is shaken when the prophets warn him against the union threatening a significant conflict to come. The arrival of an unknown Bajoran farmer on the station heralds a new intrigue...