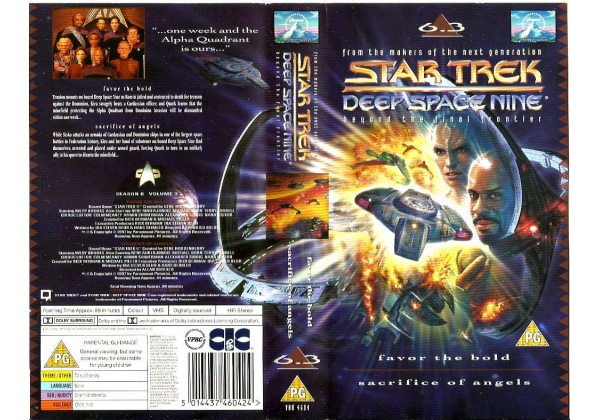 Sleeve Sypnosis:
"...one week and the Alpha Quadrant is ours..."
DAMAR

Tension mounts on board Deep Space Ninea as Rom is jailed and sentenced to death for treason against the Dominion, Kira savagly beats a Cardassian officer, and Quark learns that the minefield protecting the Alpha Quadrant from the Dominion invasion will be dismantled within one week...

While Sisko attacks an armada of Cardassian and Dominion ships in one of the largest space battles in Federation history, Kira and her band of saboteurs on board Deep Space Nine find themselves arrested and placed under armed guard, forcing Quark to turn to an unlikely ally in his quest to disharm the minefield...

Or find "Star Trek: Deep Space Nine Vol. 6.3 - Favor the Bold/Sacrifice of" on VHS and DVD / BluRay at Amazon.