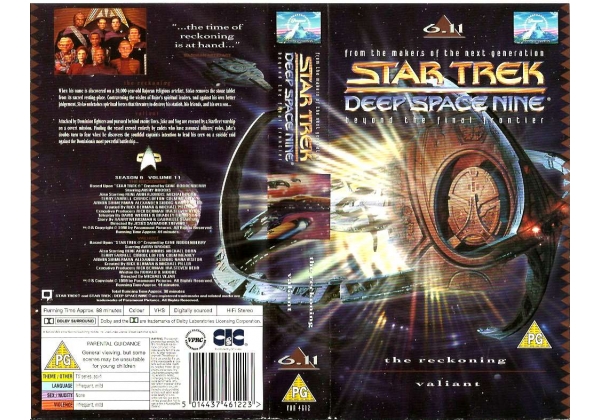 Sleeve Sypnosis:
"...the time of reckoning is at hand..."
BAJORIAN ARTEFACT

When his name is discovered on a 30,000-year old Bajoran religious artefact, Sisko removes the stone tablet from it's sacred resting-place. Contravening the wishes of Bajor's spiritual leaders, and against his own better judgement, Sisko unleashes spiritual forces that threaten to destroy the station, his friends, and his own son...

Attacked by Dominon fighters and pursued behind enemy lines, Jake and Nog are rescued by a Starfleet warship on a covert mission. Finding the vessel crewed entirely by cadets who have assumed officers' roles, Jake's doubts turn to fear when he discovers the youthful captain's intention to lead his crew on a suicide raid against the Dominionis most powerful battleship...