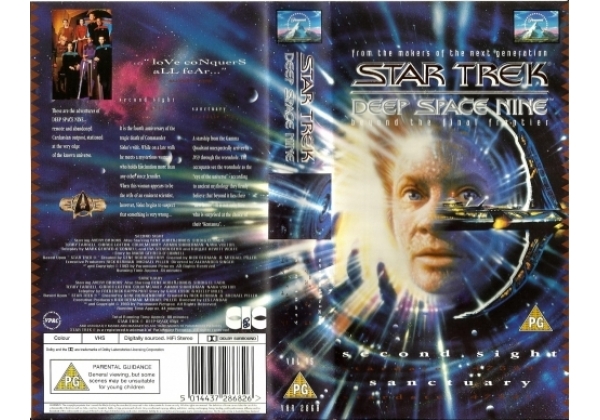 BAJORAN PROVERB
These are the adventures of
DEEP SPACE NINE...
remote and abandoned
Cardassian outpost, stationed
at the very edge of the known

Second Sight
Stardate 47329.4
Its the fourth anniversary of the tragic death of Commander Sisko's wife. While on a late walk he meets a mysterious woman, who holds fascination more than any other since Jennifer. When this woman appears to be the wife of an eminent scientist, however, Sisko begins to suspect that something is wrong...

A starship from the Gamma Quadrant unexpectedly arrives at DS9 through the wormhole. The occupants see the wormhole as the "eye of the universe" - according to ancient mythology they firmly believe that beyond it lies their "new home". It is not only Kira who is surprised at the choice of their "Kentanna".