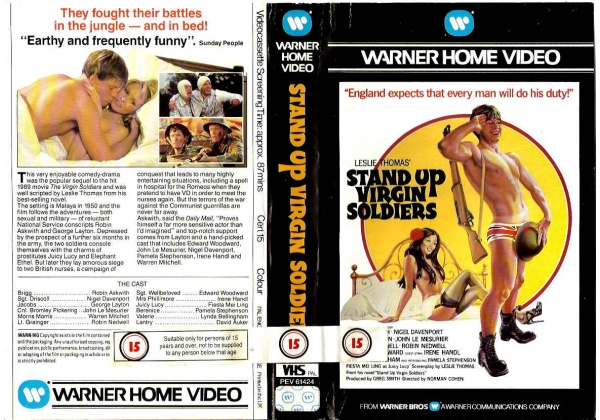 Sleeve Sypnosis:
They fought their battles in the jungle - and in the bed!

This very enjoyable comedy-drama was the popular sequel to the hit 1969 movie The Virgin Soldiers and was well scripted by Leslie Thomas from his best-selling novel. The setting is Malaya in 1950 and the film follows the adventures-both sexual and military-of reluctant National Service conscripts Robin Askwith and George Layton. Depressed by the prospect of a further six months in the army, the two soldiers console themselves with the charms of prostitutes Juicy Lucy and Elephant Ethel.

But later they lay amorous siege to two British nurses, a campaign of conquest that leads to many highly entertaining situations, including a spell in hospital for the Romeos when they pretend to have VD in order to meet the nurses again. But the terrors of the war against the Communist guerrillas are never far away.

Or find "Stand Up Virgin Soldiers" on VHS and DVD / BluRay at Amazon.