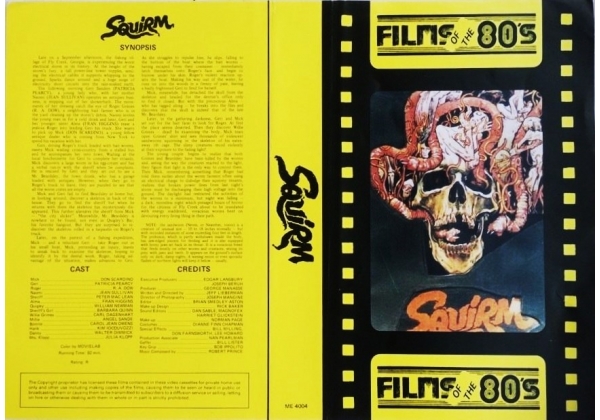 Sleeve Sypnosis:
Late on a September afternoon, the fishing village of Fly Creek, Georgia is experiencing the worst electrical storm in it's history. At the height of the storm's fury, a tall power line tower topples sending the electrical cables it supports whipping to the ground. Sparks dance around and a huge surge of electricity short circuits into the rain soaked earth. The following morning Geri Sanders (PATRICIA PEARCY) a young lady who, with her mother Naomi (JEAN SULLIVAN) operates an antique business, is stepping out of her showerbath. The movements of her dressing catch the eye of Roger Grimes (R.A. DOW) a neighbouring bait farmer who is in the yard cleaning up the storm's debris. Naomi invites the young man in for a cold drink and later, Geri and her younger sister Alma (FRAN HIGGINS) tease a jealous Roger into lending Geri his truck. She wants to pick up Mick (DON SCARDINO), a young fellow antique dealer who is coming from New York to spend his vacation with her. Geri, driving Roger's truck loaded with bait worms, meets Mick wading cross-country from a stalled bus and he accompanies her into town. Waiting at the local luncheonette for Geri to complete her errands, Mick discovers a large worm in his egg-cream and has a verbal run-in with the sheriff when he complains. He is rescued by Geri and they set out to see a Mr Beardsley, the town drunk, who has a garage loaded with antiques. However, when they go to Roger's truck to leave, they are puzzled to see that all the worm crates are empty. Mick and Geri fail to find Beardsley at home but, in looking around, discover a skeleton in the back of the house. They go to find the sheriff but when he returns with them the skeleton has mysteriously disappeared. This further alienates the sheriff from Mick - 'the city slicker'. Meanwhile, Mr Beardsley is nowhere to be found, not even in Quigley's Bar, his favourite hangout. But they are surprised to rediscover the skeleton rolled in tarpaulin on Roger's truck Later, on the pretext of a fishing expedition, Mick - and a reluctant Geri - take Roger out in his small boat. Mick pretending an injury, leaves to sneak back to examine the skeleton, hoping to identify it by the dental work. Roger taking advantage of the situation, makes advances to Geri. As she struggles to repulse him, he slips, falling to the bottom of the boat where the bait worms - having escaped from their container - immediately latch themselves onto Roger's face and begin to burrow under his skin. Roger's violent reaction upsets the boat. Making his way out of the water, he runs on into the woods in a frenzy of pain, leaving a badly frightened Geri to fend for herself. Mick, meanwhile, has detached the skull from the skeleton and headed for the dentist's office only to find it closed. But with the precocious Alma - who has tagged along - he breaks into the files and discovers that the skull is indeed that of the late Mr Beardsley. Later, in the gathering darkness, Geri and Mick set out for the bait farm to look for Roger. At first the place seems deserted. Then they discover Willie Grimes - dead! In examining the body, Mick tears open Grimes' shirt and sees thousands of iridescent sandworms squirming in the skeleton of his eaten-away rib cage. The slimy creatures recoil violently at their exposure to the fading light! The young couple begins to realize that both Grimes and Beardsley have been killed by the worms and, seeing the way the creatures reacted to the light, they figure that light is the only way to control them. Then Mick, remembering something that Roger had told them earlier about the worm farmers often using an electrical charge to dislodge their squirmy tenants, realizes that broken power lines from last night's storm must be discharging their high voltage into the ground. The daylight had restricted the activities of the worms to a minimum, but night was falling - a dark, moonless night which presaged hours of horror for the citizens of Fly Creek about to be inundated with energy maddened, voracious worms bent on devouring every living thing in there path. NOTE: The sandworm (Nereis or Neanthes virens) is a creature of unusual size - 10 to 18 inches normally - but with recorded instances of some exceeding four feet in length. The proboscis, which is partly withdrawn inside the body, has saw-edged pincers for feeding and it is also equipped with horny jaws set back in its throat. It is a voracious breed that feeds mostly on other worms and crustacea, seizing its prey with jaws and teeth. It appears on the ground's surface only on dark, damp nights. A waning moon or even sporadic flashes of northern lights will keep it below - usually.

Or find "Squirm" on VHS and DVD / BluRay at Amazon.