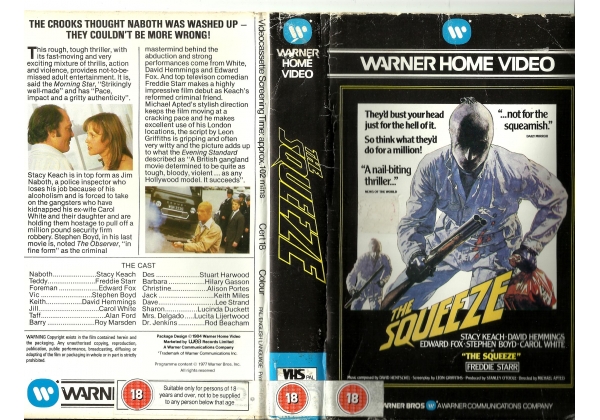 Sleeve Sypnosis:
They'd bust your head just for the hell of it.
So think what they'd do for a million!

"A nail-biting thriller..." News of the World

"...not for the squeamish." Daily Mirror

This rough, tough thriller, with its fast-moving and very exciting mixture of thrills, action and violence, provides not-to-be-missed adult entertainment. It is, said the Morning Star, “Strikingly well-made” and has “Pace, impact and a gritty authenticity”. Stacy Keach is in top form as Jim Naboth, a police inspector who loses his job because of his alcoholism and is forced to take on the gangsters who have kidnapped his ex-wife Carol White and their daughter and are holding them hostage to pull off a million pound security firm robbery. Stephen Boyd, in his last movie is, noted The Observer, “in fine form” as the criminal mastermind behind the abduction and strong performances come from White, David Hemmings and Edward Fox. And top television comedian Freddie Starr makes a highly impressive film debut as Keach's reformed criminal friend. Michael Apted's stylish direction keeps the film moving at a cracking pace and he makes excellent use of his London locations, the script by Leon Griffiths is gripping and often very witty and the picture adds up to what the Evening Standard described as “A British gangland movie determined to be quite as tough, bloody, violent ..... as any Hollywood model. It succeeds”.