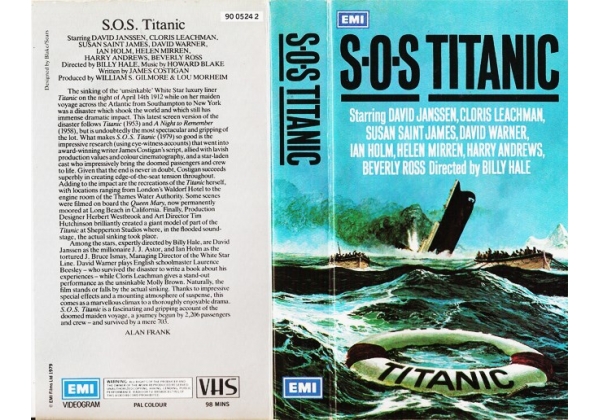 Sleeve Sypnosis:
The sinking of the 'unsinkable' White Star luxury liner Titanic on the night of April 14th 1912 while on her maiden voyage across the Atlantic from Southampton to New York was a disaster which shook the world and which still has immense dramatic impact. This latest screen version of the disaster follows Titanic (1953) and A Night to Remember (1958), but is undoubtedly the most spectacular and gripping of the lot. What makes S.O.S. Titanic (1979) so good is the impressive research (using eye-witness accounts) that went into award-winning writer James Costigan's script, allied with lavish production values and colour cinematography, and a star-laden cast who is never in doubt, Costigan succeeds superbly in creating edge-of-the-seat tension throughout. Adding to the impact are the recreations of the Titanic herself, with locations ranging from London's Waldorf Hotel to the engine room of the Thames Water Authority. Some scenes were filmed on board the Queen Mary, now permanently moored at Long Beach in California. Finally, Production Designer Herbert Westbrook and Art Director Tim Hutchinson brilliantly created a giant model of part of the Titanic at Shepperton Studios where, in the flooded sound-stage, the actual sinking took place. Among the stars, expertly directed by Billy Hale, are David Janssen as the millionaire J.J. Astor, and Ian Holm as the tortured J. Bruce Ismay, Managing Director of the White Star Line. David Warner plays English schoolmaster Laurence Beesley - who survived the disaster to write a book about his experiences - while Cloris Leachman gives a stand-out performance as the unsinkable Molly Brown. Naturally, the film stands or falls by the actual sinking. Thanks to impressive special effects and a mounting atmosphere of suspense, this comes as a marvellous climax to a thoroughly enjoyable drama. S.O.S. Titanic is a fascinating and gripping account of the doomed maiden voyage, a journey begun by 2,206 passengers and crew - and survived by a mere 703.