Some Kind of Wonderful
CIC Video 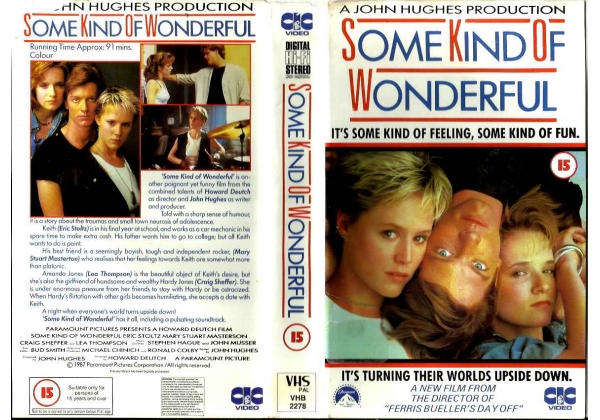 Sleeve Sypnosis:
'Some Kind of Wonderful' is another poignant yet funny film from the combined talents of Howard Deutch as director and John Hughes as writer and producer.

Told with a sharp sense of humor, it is a story about the traumas and small town neurosis of adolescence. Keith (Eric Stoltz) is in his final year at school, and works as a car mechanic in his spare time to make extra cash. His father wants him to go to college; but all Keith wants to do is paint.

His best friend is a seemingly boyish, tough and independent rocker, (Mary Stuart Masterton) who realises that her feelings towards Keith are somewhat more than platonic.

Amanda Jones (Lea Thompson) is the beautiful object of Keith's desire, but she is also the girlfriend of handsome and wealthy Hardy Jones (Craig Sheffer). She is under enormous pressure from her friends to stay with Hardy or be ostracized.

When Hardy's flirtation with other girls becomes humiliating, she accepts a date with Keith.
A night when everyone's world turns upside down! 'Some Kind of Wonderful' has it all, including a pulsating soundtrack.

Some Kind of Wonderful

Or find "Some Kind of Wonderful" on VHS and DVD / BluRay at Amazon.