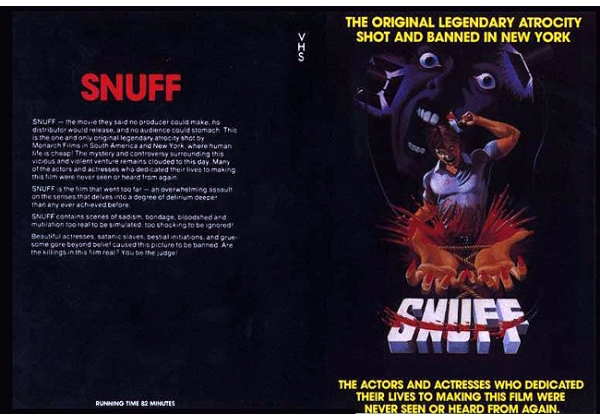 Sleeve Sypnosis:
SNUFF - the move they said no producer could make, no distributor would release, and no audience could stomach. This is the one and only original legendary atrocity shot by Monarch Films in South America and New York, where human life is cheap! The mystery and controversy surrounding this vicious and violent venture remains clouded to this day.

Many of the actors and actresses who dedicated their lives to making this film were never seen or heard from again. SNUFF is the film that went too far - an overwhelming assault on the senses that delves into a degree of delirium deeper than any ever achieved before. SNUFF contains scenes of sadism, bondage, bloodshed and mutilation too real to be simulated, too shocking to be ignored!! Beautiful actresses, satanic slaves, bestial initiations, and gruesome gore beyond belief caused this picture to be banned. Are the killings in this film real? You be the judge!

Or find "Snuff" on VHS and DVD / BluRay at Amazon.