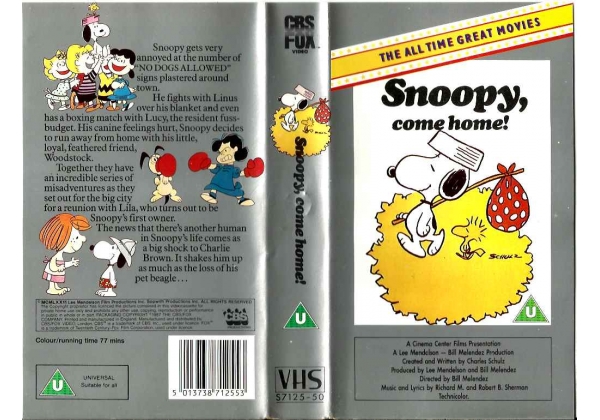 Sleeve Sypnosis:
Snoopy gets very annoyed at the number of "NO DOGS ALLOWED" signs plastered around town. He fights with Linus over his blanket and even has a boxing match with Lucy, the resident fuss-budget. His canine feelings hurt, Snoopy decides to run away from home with his little, loyal, feathered friend, Woodstock.

Together they have an incredible series of misadventures as they set out for the big city for a reunion with Lila, who turns out to be Snoopy's first owner. The news that there's another human in Snoopy's life comes as a big shock to Charlie Brown. It shakes him up as much as the loss of his pet beagle...

Or find "Snoopy, Come Home!" on VHS and DVD / BluRay at Amazon.