Smokey and the Bandit
CIC Video 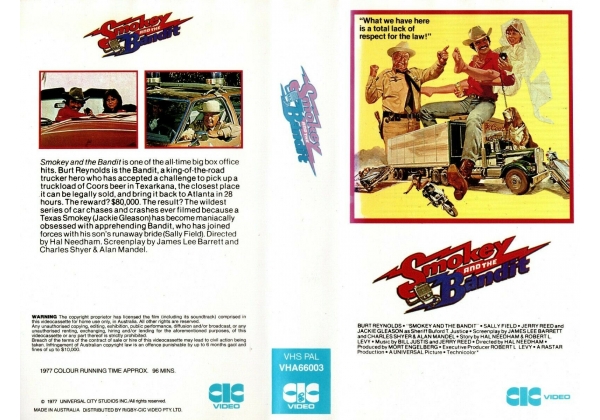 Sleeve Sypnosis:
Smokey and the Bandit is one of the all-time big box office hits. Burt Reynolds is the Bandit, a king-of-the-road trucker hero who has accepted a challenge to pick up a truckload of Coors beer in Texarkana, the closest place it can be legally sold, and bring it back to Atlanta in 28 hours. The reward? $80,000. The result? The wildest series of car chases and crashes ever filmed because a Texas Smokey (Jackie Gleason) has become maniacally obsessed with apprehending Bandit, who has joined forces with his son's runaway bride (Sally Field). Directed by Hal Needham. Screenplay by James Lee Barrett and Charles Shyer & Alan Mandel.

Smokey and the Bandit

Or find "Smokey and the Bandit" on VHS and DVD / BluRay at Amazon.