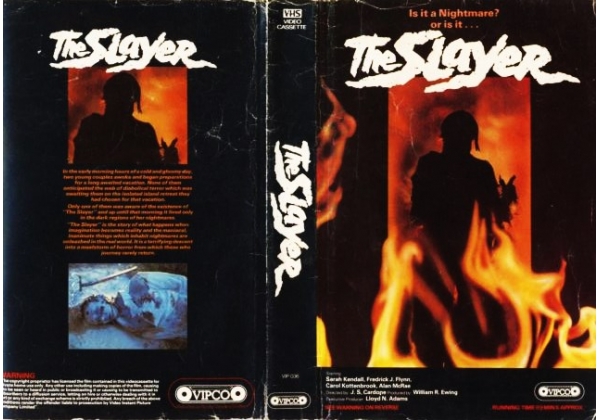 Sleeve Sypnosis:
Is it a Nightmare? Or is it... The Slayer
In the early morning hours of a cold and gloomy day, two young couples awoke and began preparations for a long awaited vacation. Non of them anticipated the web of diabolical terror which was awaiting them on the isolated island retreat they had chosen for that vacation. Only one of them was aware of the existence of "The Slayer" and up until that morning it lived only in the dark regions of her nightmares. "The Slayer" is the story of what happens when imagination becomes reality and the maniacal, inanimate things which inhabit nightmares are unleashed in the real world. It is a terrifying descent into a maelstorm of horror from which those who journey rarely return.

Or find "Slayer, The" on VHS and DVD / BluRay at Amazon.