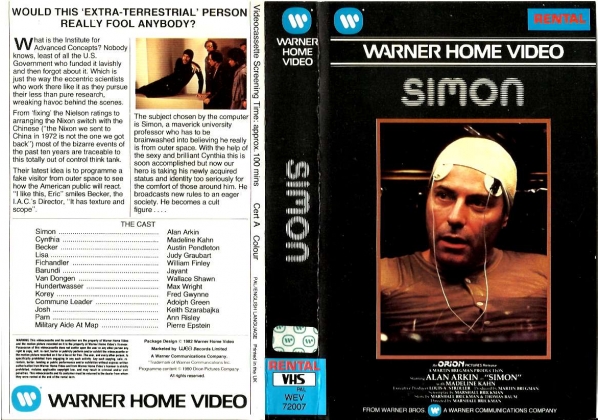 Sleeve Sypnosis:
WOULD THIS 'EXTRA-TERRESTRIAL' PERSON REALLY FOOL ANYBODY?

What is the Institute for Advanced Concepts? Nobody knows, least of all the U.S. Government who funded it lavishly and then forgot about it. Which is just the way the eccentric scientists who work there like it as they pursue their less than pure research, wreaking havoc behind the scenes.

From 'fixing' the Nielson ratings to arranging the Nixon switch with the Chinese ("the Nixon we sent to China in 1972 is not the one we got back") most of the bizzarre events of the past ten years are traceable to this totally out of control think tank. Their idea is to programme a fake visitor from outer space to see how the American public react.

"I like this, Eric" smiles Becker, the I.A.C.'s Director, "It has texture and scope". The subject chosen by computer is Simon, a maverick university professor who has to be brainwashed into believing he really is from outer space. With the help of the sexy and brilliant Cynthia this is soon accomplished but now our hero is taking his newly acquired status and identity too seriously for the comfort of those around him.

He broadcasts new rules to an eager society. He becomes a cult figure...

Or find "Simon" on VHS and DVD / BluRay at Amazon.