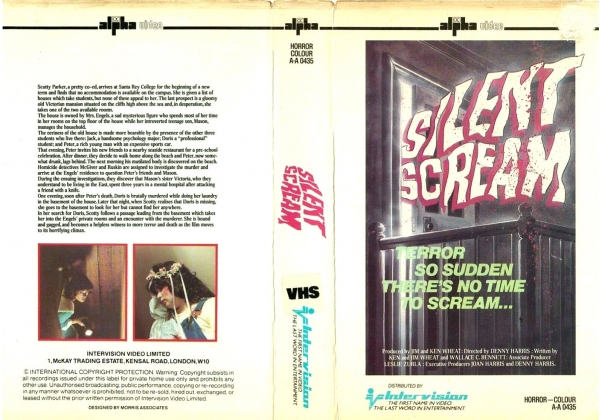 Sleeve Sypnosis:
Scotty Parker, a pretty co-ed, arrives at Santa Rey College for the beginning of a new term and finds that no accommodation is available on the campus. She is given a list of houses which take students, but none of these appeal to her. The last prospect is a gloomy old Victorian mansion situated on the cliffs high above the sea and, in desperation, she takes one of the two available rooms. The house is owned by Mrs. Engels a sad mysterious figure who spends most of her time in her rooms on the top floor of the house while her introverted teenage son, Mason, manages the household. The eeriness of the old house is made more bearable by the presence of the other three students who live there: Jack, a handsome psychology major; Doris a "professional" student; and Peter, a rich young man with an expensive sports car.

That evening, Peter invites his new friends to a nearby seaside restaurant for a pre-school celebration. After dinner, they decide to walk home along the beach and Peter, now somewhat drunk, lags behind. The next morning his mutilated body is discovered on the beach. Homicide detectives McGiver and Buskin are assigned to investigate the murder and arrive at the Engels' residence to question Peter's friends and Mason. During the ensuing investigations, they discover that Mason's sister Victoria, who they understand to be living in the East, spent three years in a mental hospital after attacking a friend with a knife. One evening, soon after Peter's death, Doris is brutally murdered while doing her laundry in the basement of the house.

Later that night, when Scotty realises that Doris is missing, she goes to the basement to look for her but cannot find her anywhere. In her search for Doris, Scotty follows a passage leading from the basement which takes her into the Engels' private rooms and an encounter with the murderer. She is bound and gagged, and becomes a helpless witness to more terror and death as the film moves to its horrifying climax.

Or find "Silent Scream" on VHS and DVD / BluRay at Amazon.